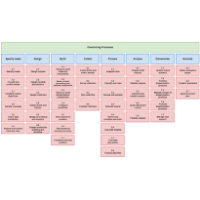 1. The GSBPM describes and defines the set of business processes needed to produce official statistics. It provides a standard framework and harmonised terminology to help statistical organisations to modernise their statistical production processes, as well as to share methods and components. The GSBPM can also be used for integrating data and metadata standards, as a template for process documentation, for harmonizing statistical computing infrastructures, and to provide a framework for process quality assessment and improvement. These and other purposes for which the GSBPM can be used are elaborated further in Section VI. This version of the GSBPM is fully aligned with version 1.1 of the Generic Statistical Information Model (GSIM) 1 and provides a basis for the implementation of the Common Statistical Production Architecture (CSPA) 2 .

2. The Joint UNECE / Eurostat / OECD Work Sessions on Statistical Metadata (METIS) have prepared a Common Metadata Framework (CMF) 3 . Part C of this framework is entitled "Metadata and the Statistical Cycle". This part refers to the phases of the statistical business process (also known as the statistical value chain or statistical cycle) and provides generic terms to describe them. Since November 2013, this work has been taken over by the Modernisation Committee on Standards, under the High-Level Group for the Modernisation of Statistical Production and Services (HLG) 4 .

3. During a workshop on the development of Part C of the CMF, held in Vienna in July 2007 5 , the participants agreed that the business process model used by Statistics New Zealand would provide a good basis for developing a Generic Statistical Business Process Model. Following several drafts and public consultations, version 4.0 of the GSBPM was released in April 2009. It was subsequently widely adopted by the global official statistics community, and formed one of the cornerstones of the HLG vision and strategy for standards-based modernisation.

4. In December 2012, a complementary model, the Generic Statistical Information Model (GSIM) was released (for more information see section III). The work to develop and subsequently implement the GSIM resulted in the identification of several possible enhancements to the GSBPM. During 2013, the HLG launched a project on "Frameworks and Standards for Statistical Modernisation" which included a broader review of the GSBPM and the GSIM, to improve consistency between the documentation of the models, and to incorporate feedback based on practical implementations. The current version of the GSBPM (version 5.0) is the direct result of this work. Whilst it is considered final at the time of release, it is also expected that future updates may be necessary in the coming years, either to reflect further experiences from implementing the model in practice, or due to the evolution of the nature of statistical production. The reader is therefore invited to check the website www.unece.org/stats/gsbpm to be sure of having the latest version.

5. The review of version 4.0 of the GSBPM had a clear mandate from the HLG to only introduce changes that had a strong business case and widespread support in the international statistical community. The rationale for this approach was that many organisations had invested heavily in implementing the GSBPM. Major changes could imply significant costs, and could ultimately be counter-productive in terms of securing the widespread adoption and use of the model. As a result, there are a limited number of changes to the model itself, but many more improvements, additions and clarifications to the supporting documentation.

6. The main changes to the GSBPM between versions 4.0 and 5.0 are as follows: