High-Level Group for the Modernisation of Official Statistics

High-Level Group for the Modernisation of Official Statistics 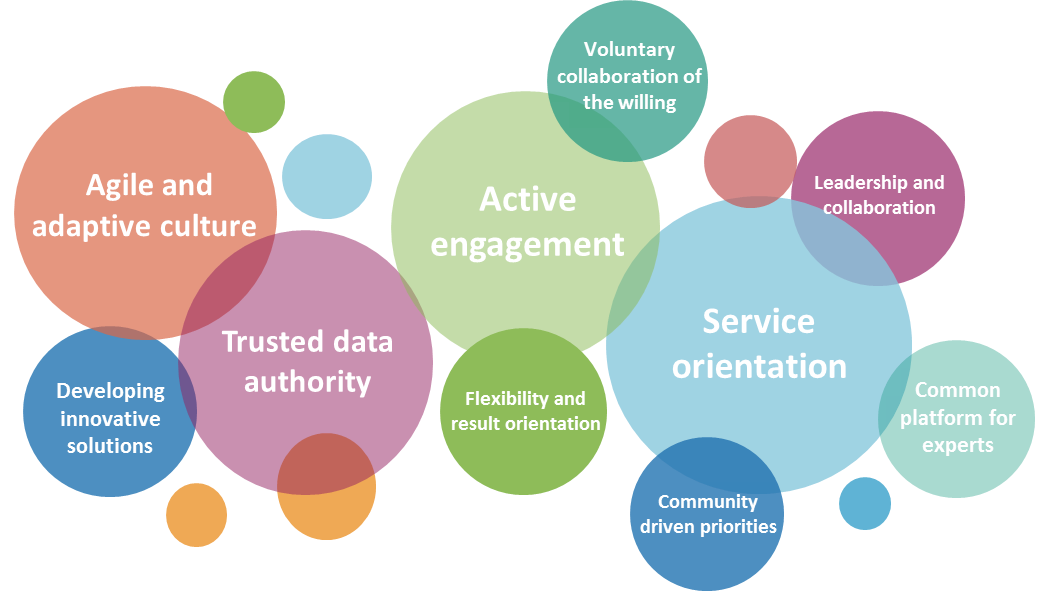 The HLG-MOS oversee and manage: 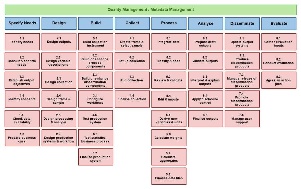 Common Statistical Data Architecture (CSDA) is reference architecture and guidance for the modernisation of their processes and systems. Read more here

Strategic Communication Framework is a guide for Statistical Organisations to the development and implementation of a communication strategy. Read more here

Generic Statistical Data Editing Model (GSDEM) is intended as a reference for all official statisticians whose activities include data editing. Read more here

Machine Learning for Official Statistics the 2019-2020 project continued as a collaboration community in 2021. Read more here

Blog on Recent highlights and updates 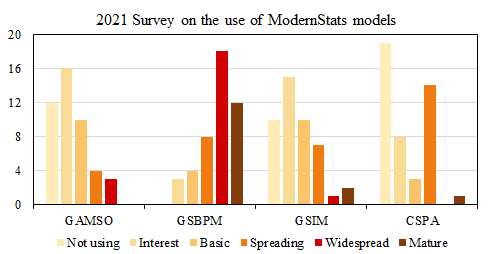 To highlight, out of the 45 respondents, two-thirds answered that there is widespread awareness and high level of familiarity with the application of GSBPM. For the organisations that took part in both surveys in 2018[2] and 2021, half of them reported increased use of GSBPM to modernise their statistical production process. Many of the organisations reported to have further developed a national version of GSBPM, with modification of phases and sub-processes in GSBPM and addition of a finer level of details based on the local context.[3] The top three benefits of using GSBPM identified by the respondents are (i) ease of internal communication, (ii) facilitation of quality management, and (iii) ease of comparing processes and identifying inefficiency within the organisation. 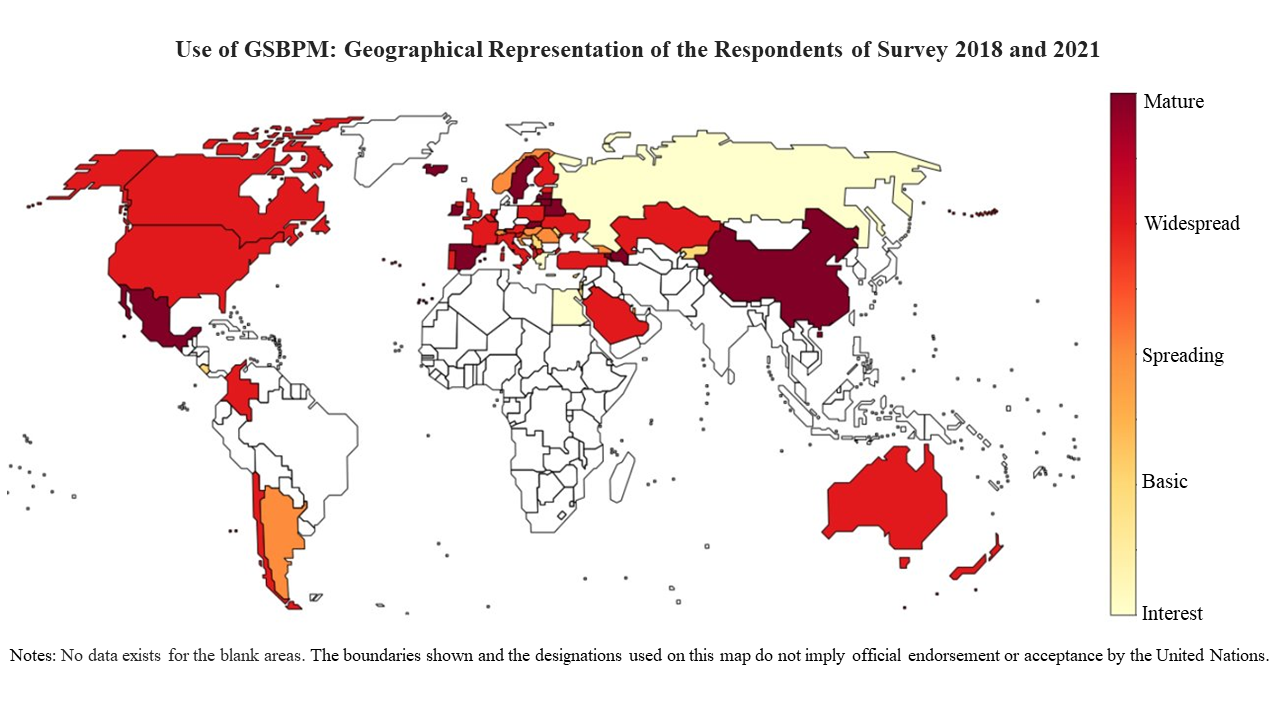 Regarding the limited use of GAMSO, GSIM, and CSPA, the major reasons behind are the lack of awareness and related knowledge, while some reported that they have their own model and do not feel the need to adapt to these models. In addition, organisations generally lack human resources and expertise to implement the model. It hinders further application of the model, despite the widely recognized benefits of facilitating the share of methods, service or capability within the organisation as well as easing internal communication.

The ModernStats models discussed above provide a common language and tool to map all activities within and between statistical organisations to a common approach. They enable statistical organisations to collaborate and facilitate exchange of information and the sharing of statistical services, thereby contributing to the advancement of official statistics at the national and international levels for evidence-based policymaking and assessing progress towards achieving the Sustainable Development Goals.

To promote the use of modernisation statistical models, a proactive communication strategy and capacity building programme are essential. UNECE will also continue to work closely with statistical organisations to update the models as well as improve linkage and consistency among the models to support wider integration and implementation.

[1] The online survey was conducted in February and March 2021.

[2] Results of the 2018 survey can be found at https://unece.org/fileadmin/DAM/stats/documents/ece/ces/ge.58/2018/mtg1/UNECE_CHOI_Presentation.pdf

[3] Under the High-level Group for the Modernisation of Official Statistics (HLG‑MOS), the Supporting Standards Group provides support for the implementation of the “ModernStats models”. A new task team was created in 2021 to compile examples of finer level of GSBPM activities, identify commonalities among them, and prepare a supplementary document to support countries using GSBPM in more detailed level as well as provide input for the next GSBPM revision.

We have combined the output of the HLG-MOS Strategic Communication Framework projects (2018-2019) and additional use cases and examples into a paper publication. Please find below a reprint of an article kindly prepared by our colleague Fiona Willis-Nuñez for UNECE news. (click here for the original)

Statistics are all around us. All the more since the COVID-19 pandemic began. Rarely do we see a news story, political debate, press conference or even a social media debate that doesn’t reference statistics. In this environment, the custodians of the figures—the national statistical offices (NSOs) which produce, curate and publish official statistics—have an unparalleled role to play in communicating with their users.

The new Strategic Communication Framework for Statistical Institutions serves as a guide to help them navigate the changing demands of this role. 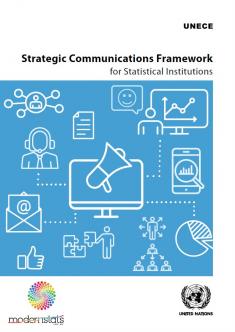 Statistical communication is about more than writing press releases or answering user questions and requests. NSOs need a modern, proactive communication strategy with clearly defined key messages, and must use different channels to reach various target audiences. This may seem obvious, but it is a relatively new concept for many NSOs, which have traditionally focused their efforts and resources on dissemination—publishing their figures in tables, databases and sometimes analytical reports and leaving users to get on with the task of finding what they need, processing it and making sense of it. Dissemination has often been designed principally for expert users who know what they are looking for and how to interpret it.

Increasingly, though, NSOs are embracing the idea that their ‘target audience’ includes all types of users, or even non-users, and that two-way communication with citizens and improving statistical literacy fall within their remit.

With this in mind, the High-Level Group for the Modernization of Official Statistics (HLG-MOS), a group of chief statisticians reporting to UNECE’s Conference of European Statisticians (CES), decided back in 2018 to make strategic communication a key priority. They launched a project to develop a common framework that can serve as a guide for individual NSOs as they rethink their approaches to communicating with data users and with the public. The resulting framework, developed by a group of experts from 11 countries - Australia, Bosnia and Herzegovina, Canada, Croatia, Ireland, Italy, Mexico, Netherlands, Poland, United Kingdom and the United States - plus OECD and Eurostat and endorsed by CES, highlights examples of success and lessons learned from countries in a range of aspects of communication: rebranding in Canada and Poland; issue and risk management in Australia; and crisis communications in the United States of America.

The framework is designed to give NSOs the tools they need to build communication into their overall corporate strategy, helping to increase their visibility, relevance, and brand recognition. It covers the full range of communications considerations for NSOs, with recommendations on such elements as conducting stakeholder engagement, evaluating external communications, building a mission and vision, and enhancing communication with employees.

The framework offers guidance not only on communicating statistical information but also on communicating about values, purpose and the unique role of official statistics within the broader statistical landscape. The need for this has been highlighted during the pandemic, as producers of official statistics have demonstrated and defended the importance of making trustworthy, politically independent, rapid and comparable figures available for policymakers in response to ever-changing demand.

An evolving collection of case studies, published alongside the framework and still growing as countries’ experiences continue to be shared, demonstrates how NSOs have communicated with their users during the COVID-19 crisis—both about the impact of the pandemic on their operations and with tailored statistical communications about the pandemic itself.

The work will not end here. An HLG-MOS Task Team devoted to Capability and Communication is now extending the Framework, developing practical guidelines, examples and tools for managing crises and for brand management.

Statistical data combined with location information can provide critical knowledge through the integration with other data in the data ecosystem to understand multi-faceted issues of the current society. To address the information needs of the users in an increasingly complex and intertwined society, there is a great need for statistical data to be geospatially enabled using consistent and common geographies, in an accessible and usable format.

Using two global frameworks, Generic Statistical Business Process Model (GSBPM) and Global Statistical Geospatial Framework (GSGF), the Geospatial Task Team under the Supporting Standards Group of the High-Level Group on the Modernisation of Official Statistics (HLG-MOS) developed a Geospatial view of GSBPM (GeoGSBPM). It describes geospatial-related activities and considerations needed to produce geospatially enabled statistics using the structure of GSBPM while taking into account GSGF principles so that the resulting statistics have a higher level of standardisation and geospatial flexibility, as well as a greater capacity for data integration.

More details about the GeoGSBPM can be found on this wiki page. 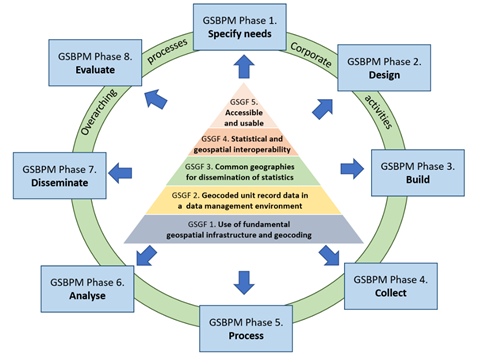 Various Expert meetings or workshops are organized as part of the programme or work of the High-Level Group for the Modernisation of Official Statistics. These statistical process based events bring together experts to discuss innovative, best practices and future work in these areas. We welcome submission of abstracts and you can preliminary register for the events. 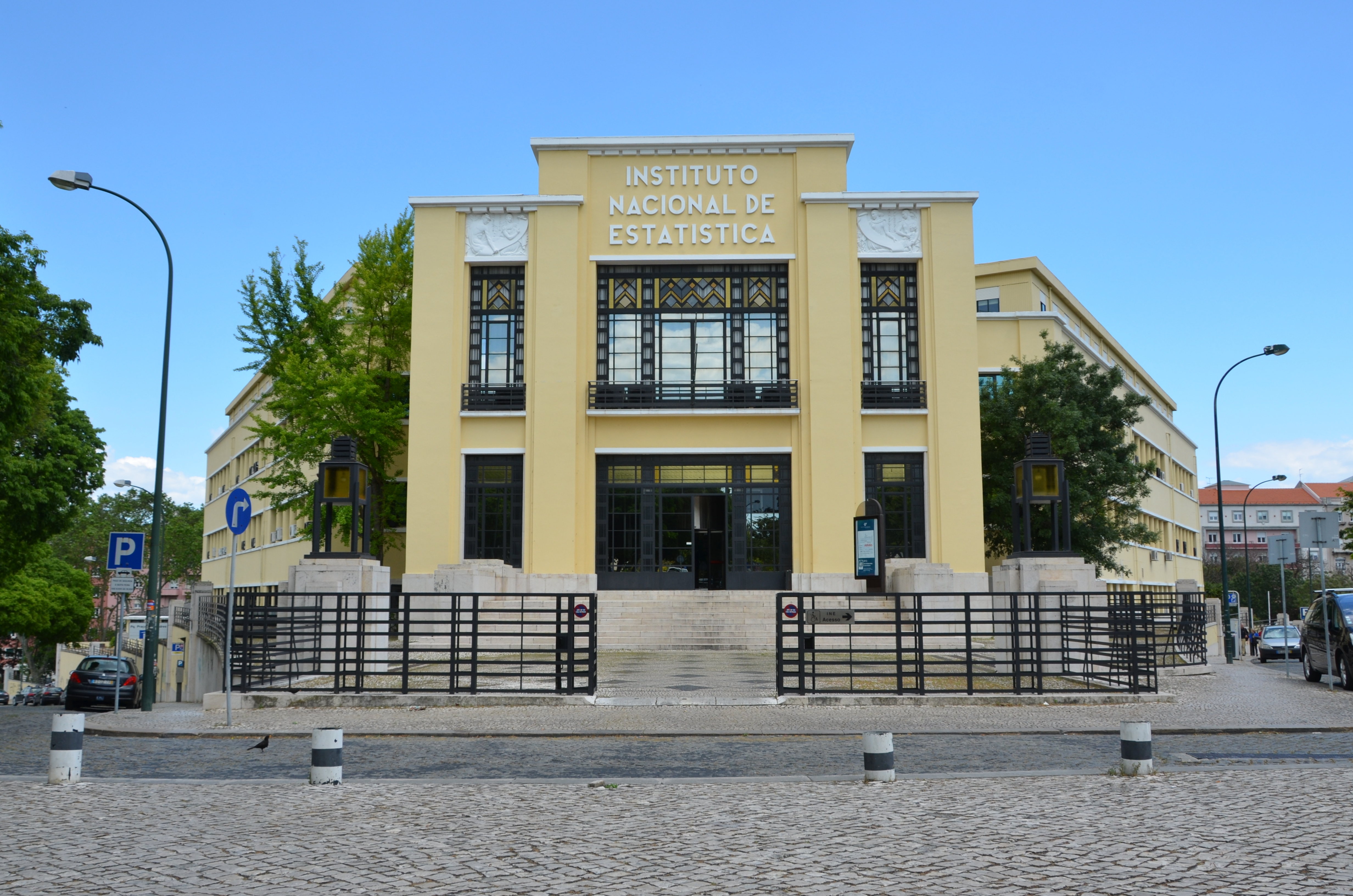 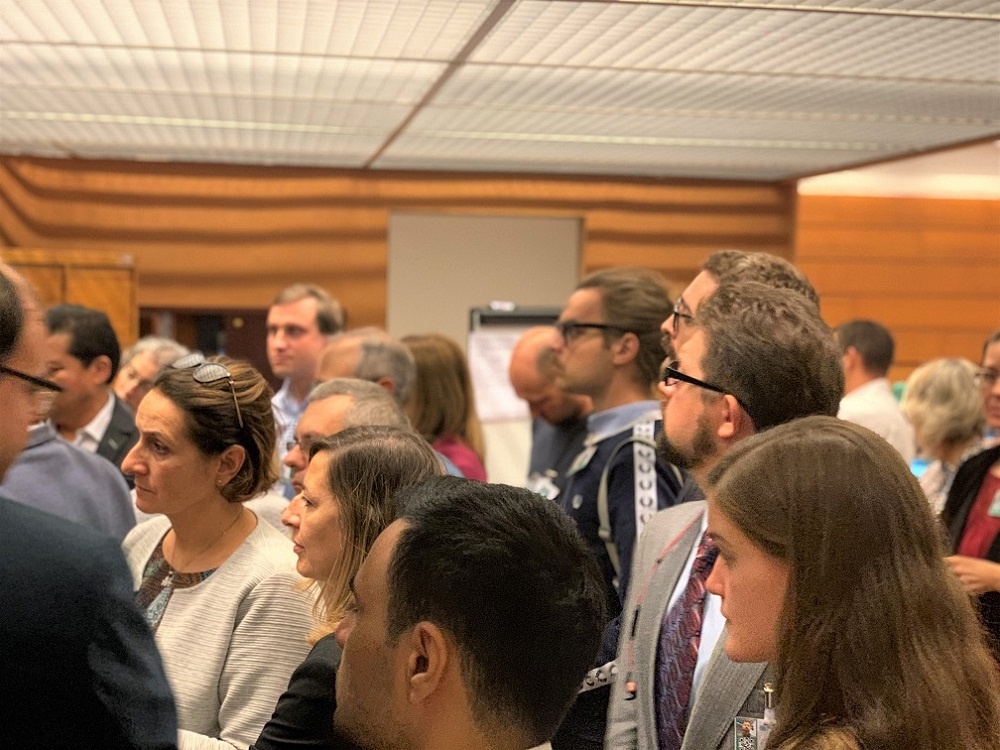 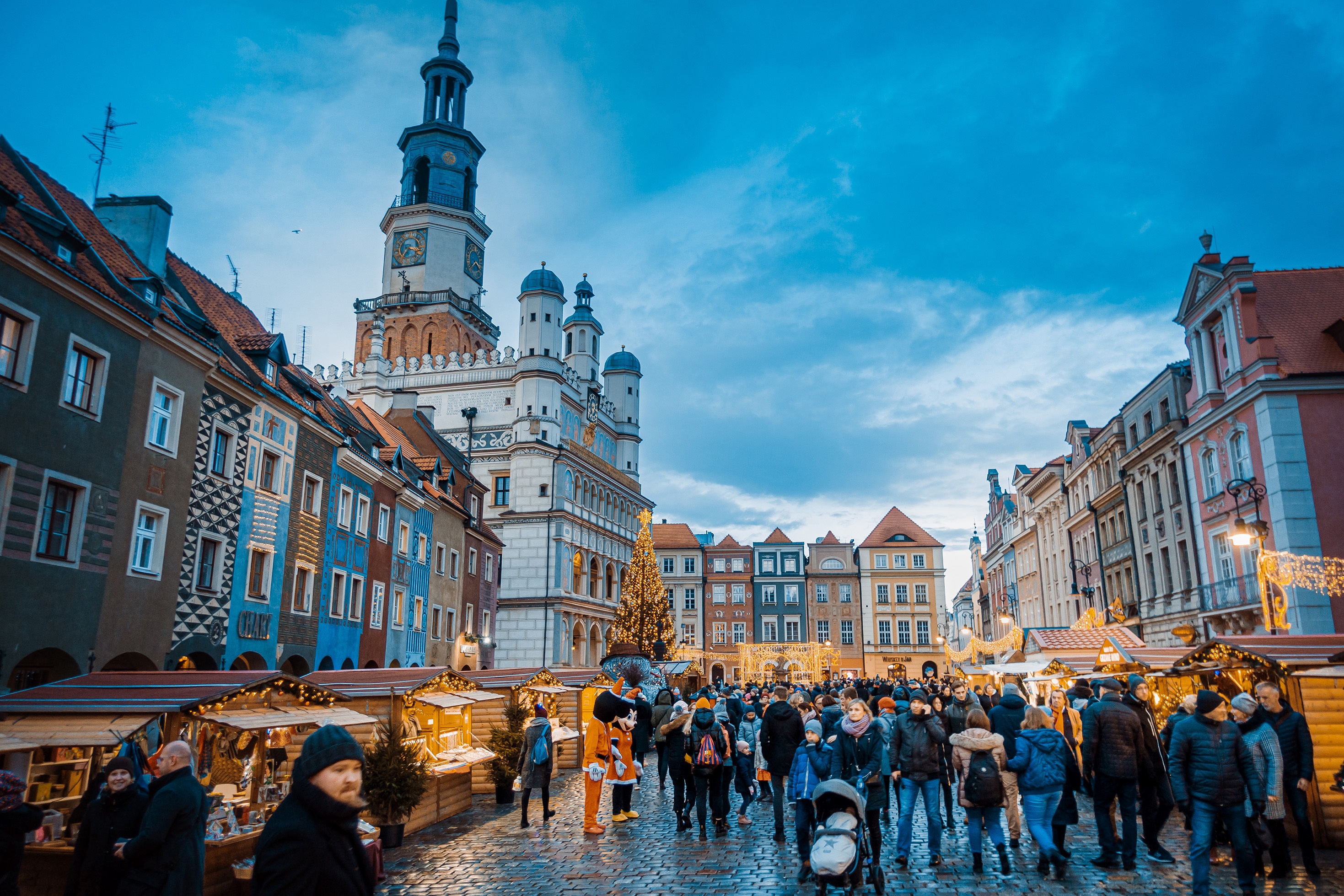 Despite the Covid19 pandemic, the involvement in the ModernStats Community increased from 2019 to 2020
Taeke Gjaltema posted on Jan 27, 2021

There were not only more participants in workshops (as these were moved from in-person to online) but also groups and projects saw and increase in participants. We thank all of you for joining the ModernStats community and hope to see you all back in 2021! 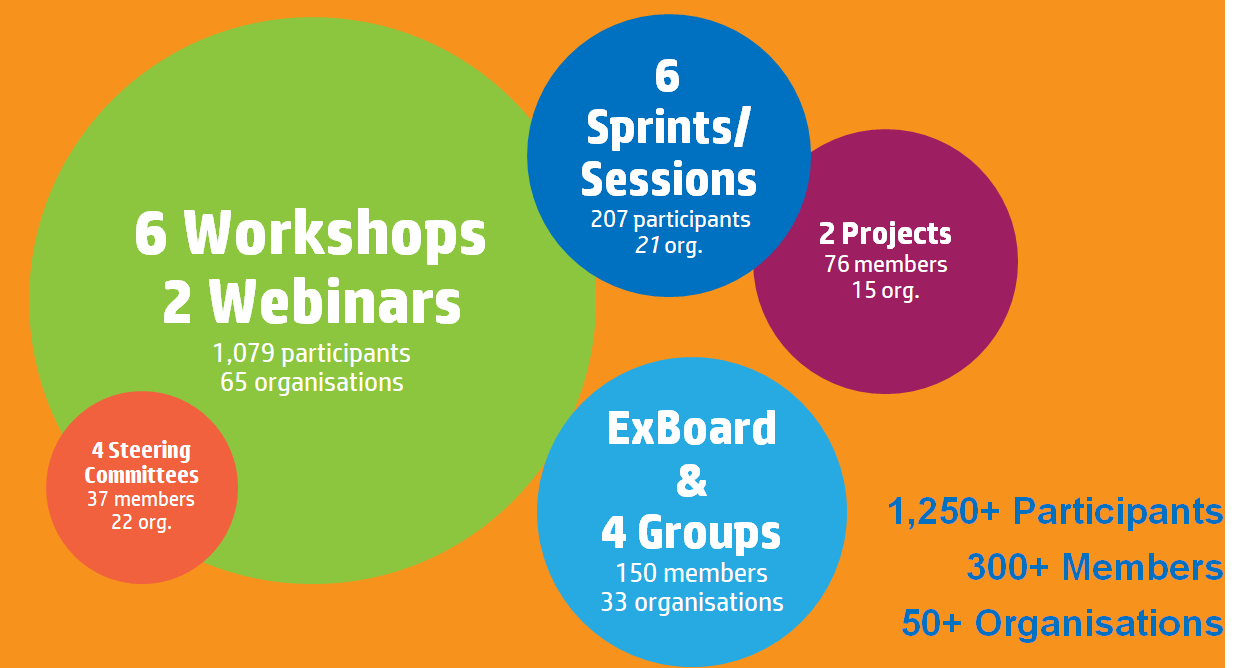 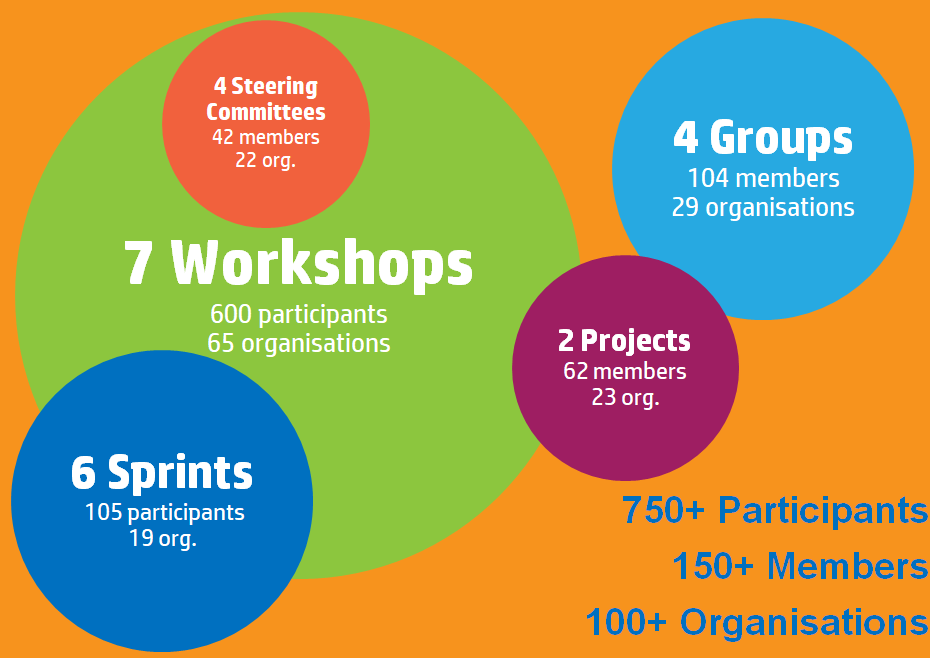 Blog on Recent highlights and updates

Please send your links to your articles on our work

Modernisation Maturity Model and the Roadmap for Implementation