An online discussion has opened on the website of The Statistical Journal of the IAOS about robustness of methods for producing business statistics during economic downturns.

This is available at the following link:

It is based on the article "Robust official business statistics methodology during COVID-19-related and other economic downturns" by Paul A. Smith and Boris Lorenc, to be found on the same website.

A report by the Hungarian Central Statistical Office (HCSO) on its activities in response to the Covid-19 crisis, submitted by Agnes Andics: 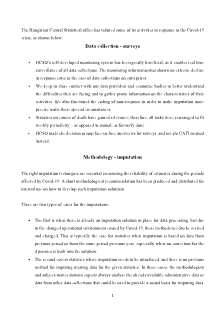 That there are risks for quality of produced business and economic statistics at times of economic downturns has been noted before, not the least on ENBES's first EESW - the 2009 edition in Stockholm - which was held just at the end of the "Great Recession" of 2007-2009. Some of the pointers here on ENBES's site are related to these contributions.

While COVID-19 is a pandemic with catastrophic consequences for populations and countries worldwide, the massive economic downturn in its wake offers yet another opportunity for business survey methodologists to reflect on methods applied in the field and may give them a chance to further improve their methods.

A part of the risks involved stems from the methodologists' reliance on some implied assumptions, expectations or implicit or explicit models.

Similarly in estimation, that same auxiliary variable could be used in a ratio-type estimator. In editing, a score for selective editing may employ the preceding period's value to identify for editing those observations with significant deviations from their historical values.

Further examples of this kind can be given. Then there are impacts regarding time series, units' births and deaths, etc (Simkins, Smith and Brand, 2010).

While use of preceding period's values may work well when the economy is performing smoothly, there are clearly risks associated with their use at times of economic turmoil. The preceding period is in times of economic turmoil not a good indicator of how the current period performs. The stratification will be less than optimal, the ratio estimator's bias might become noticeable, the editing efforts might be misdirected and far more resource demanding than actually intended.

The current economic downturn is an opportunity for business survey methodologists to gather empirical evidence on which variables - among those they are using or can get access to - are only statistically related, and thus prone to quality breakdowns in times of economic swings, and which are intrinsically related and thus less risky to use in processing and producing statistics.

Our goal should be to then promote the use of the intrinsically related variables irrespective a downturn or not, as a downturn in general comes without announcing itself in advance.

It need not be that there is an abundance of intrinsically related variables so that the task is just to pick out among a wide offering.

The task may not be simple, but now there is an opportunity - not existing in 'normal' times - to gather empirical evidence and learn. And in that sense make a positive use of the pandemic to better the business survey methodology of the future.

That theoretical understanding, supported by empirical evidence collected during economically challenging times like these, may permanently bring the practice of business survey methodology to a safer ground.

This is then yet another call to go beyond the statistics itself and gain knowledge of, if not the subject matter, then at least the body that acts: that is, the business. It might be beneficial to have business economists involved.